While the number of people falling for sending personal information to the crown prince of Nigeria in hopes of receiving his promised wealth and riches seems to be dropping, phishing remains a major issue. In fact, the number of phishing campaigns pursued by hackers around the world increased 65% in the last year.

What exactly is phishing? Hackers mimic the emails, forms, and websites of legitimate companies in an effort to lure people into providing their private, personal information, like credit cards numbers, social security information, account logins, and personal identifiers. The victim typically doesn’t realize they’ve been compromised until long after the event, and oftentimes only after their identify or finances are affected. In the past, an attack was carried out relatively quickly. As soon as the victim gave up their information, the hacker moved in and stole money from the compromised bank account. Today, it’s often more lucrative for hackers to sell that information on the Dark Web, resulting in longer-lasting, even more devastating attacks. 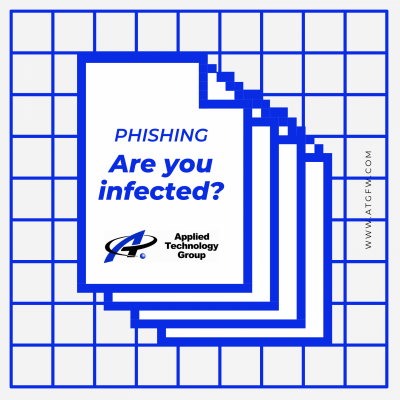 Phishing attempts directed at specific individuals or companies have been termed spear phishing. Attackers may gather personal information about their target to increase their probability of success. This technique is by far the most successful on the Internet today, accounting for 91% of attacks.

Clone phishing is a type of phishing attack whereby a legitimate, and previously delivered, email containing an attachment or link has had its content and recipient address(es) taken and used to create an almost identical or cloned email. The attachment or link within the email is replaced with a malicious version and then sent from an email address spoofed to appear to come from the original sender. It may claim to be a resend of the original or an updated version to the original. This technique could be used to pivot (indirectly) from a previously infected machine and gain a foothold on another machine, by exploiting the social trust associated with the inferred connection due to both parties receiving the original email.

Several phishing attacks have been directed specifically at senior executives and other high-profile targets within businesses, and the term whaling has been coined for these kinds of attacks. In the case of whaling, the masquerading web page/email will take a more serious executive-level form. The content will be crafted to target an upper manager and the person’s role in the company. The content of a whaling attack email is often written as a legal subpoena, customer complaint, or executive issue. Whaling scam emails are designed to masquerade as a critical business email, sent from a legitimate business authority. The content is meant to be tailored for upper management, and usually involves some kind of falsified company-wide concern. Whaling phishers have also forged official-looking FBI subpoena emails, and claimed that the manager needs to click a link and install special software to view the subpoena.

Have you ever gotten an email from your bank or medical office asking you to update your information online or confirm your username and password? Maybe a suspicious email from your boss asking you to execute some wire transfer. That is most likely a spear phishing attempt, and you’re among the 76% of businesses that were victims of a phishing attack in the last year.

Phishing scams are not always received through email and hackers are getting trickier and trickier with their preferred method of execution. Last year, in 2017, officials caught on to attacks using SMS texting (smishing), Voice phishing (vishing) or social engineering, a method in which users can be encouraged to click on various kinds of unexpected content for a variety of technical and social reasons.

Phishing is the most widely used method for spreading ransomware, and has increased significantly since the birth of major ransomware viruses like Petya and Wannacry. Anyone can become a victim of phishing, and, in turn, ransomware attacks; however, hackers have begun targeting organizations that are more likely to pay the ransoms. Small businesses, education, government, and healthcare often, unfortunately, don’t have valid data backups, so they are unable to roll back to a pre-ransomed version of their data. Instead, they have to pay their way out or cease to exist. Outside of ransom costs, victims of phishing campaigns are often branded as untrustworthy, and many of their customers turn to their competitors, resulting in even greater financial loss.

Why are effective phishing campaigns so rampant despite public awareness from media coverage?

Volume: There are nearly 5 million new phishing sites created every month, according to Webroot Threat Report. There are now even Phishing as a Service companies, offering phishing attacks in exchange for payment. One Russian website, “Fake Game,” claims over 61,000 subscribers and 680,000 credentials stolen.

They Work: Over 30% of phishing messages get opened, and 12% of targets click on the embedded attachments or links, according to the Verizon Data Breach Investigations Report. In short, these hackers have gotten really good at looking really legitimate.

They’re simple to Execute: New phishing campaigns and sites can be built by sophisticated hackers in a matter of minutes. While we think there are far more legitimate ways to be earning money, these individuals have made a living out of duplicating their successful campaigns.

How do you protect yourself from a phishing attack?

Now that you have an understanding of what phishing is, our next two blogs will teach you How to Spot a Phishing Attack, and Fixing Your Weakest Link: Your Employees.

Spread the knowledge
Are you on a hackers watchlist? Who makes your IT purchases?

Be Proactive So Your Business Technology Doesn’t Fall Behind

Technology – Out with the Old, In with the New

Use Technology For Onboarding and Offboarding